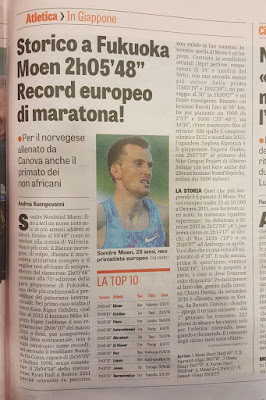 Again some doubt for something for me normal, when an athlete of good talent has continuity, motivation, tough and correct training, living (as Kenyan) in altitude for the most part of the year (223 days from the first of January).

The big performance of Moen, but especially the WAY he did, can clearly show two things:

1) White runners, with high talent (but not exceptional like many Kenyans and Ethiopians), if chose to be ATHLETES having a main focus only for some year in running, can be like the best African, and sometimes also better.

2) Clean runners, with high talent (but non exceptional like many Kenyans and Ethiopians), if chose to be ATHLETES having a main focus only for some year in running, can be at the top of the World, not depending their performance on the fact if are African or not.

Of course now there is some sceptic idiot who looks at doping as main reason of his improvement. Who know Moen (and my clear position) well know that he never used any supplement, also legal, because this is against our principles, and I think it's the best way for making the mind weak.

The big improvement of this year was very gradual, and now seems like an explosion only because there were more than 4 minutes between his previous marathon in Hannover and today, but we have to see at the time passed between them: 237 days, during which it's possible to build new situation, including a great increase of self confidence and personality.

I will write, how already I did after his HM of Valencia in 59:48, his full plan between Valencia and Fukuoka (ALWAYS IN ALTITUDE).

I hope that this results, instead being considered connected with some doping, can bring people to think that the limits we put in our mind about the clean performances are not real, and depend not from the doping of the other athletes, but on the fact that NOBODY WANTS TO DO A CLEAR CHOICE OF LIFE DEDICATED AT THE ATHLETICS FOR A SHORT PART OF HIS LIFE, something Sondre did full time this year, with 223 days (till Fukuoka) in altitude, the most part alone, having focus in training, eating and resting only.

The quality of his training improved day after day. In January, it was for him difficult to run two following days between 3'45" and 3'50" per km, because his legs were stiff and tired after a normal workout. Today, he's not able running slower than 3'40", and sometimes I had to force him to run at regeneration speed, not faster the 3'45".

The increase of his aerobic base gave him the opportunity to have frequent sessions with high volume of km at HM speed (between 2'47" and 2'52" per km) and at Marathon speed (between 2'57" and 3'02" per km), and now these two different speeds are normal in the development of his training.

After this, we have to ask ourself : "Which are the real limits for one athlete of high but not exceptional talent, who has continuity in training, right modulation between hard sessions and recovery, big motivation, ability to grow mentally and as self confidence, AND DO EVERYTHING IN HIGH ALTITUDE?

And, when we know it's possible this when white and clean, can we really believe that everybody running fast is doped, and EPO can give advantages for athletes REALLY well trained in altitude of 1 minute in 10000m and 4 minutes in Marathon?

Do you think I can suppose Sondre could run under 2:02 assuming EPO?

And somebody still has the courage to ask me "which proof you are that EPO doesn't work", continuing with the example of Lombard or Lance Armstrong, without understanding the difference from athletes at different level as talent, motivation and training (IN ALTITUDE), or from runners and bikers?

Clean your minds, start to believe in yourselves, and go in hard CLEAN training if are really interested in improving their performances.
Pubblicato da Enrico VIVIAN a 22:22